Well this week has been pretty Great! Some of the Highlights are that Elder Holland was in Hong Kong last night and he did a fireside to all the members, sadly he is in my old chapel and I had to watch it from our stake center. But its okay I will be seeing him tomorrow. He is so powerful and he gave a wonder talk on how we are all pioneers. Also how amazing this dispensation is. Its the first time we are commanded not to run from Babylon and establish Zion or Jerusalem, But to face Babylon and conquer it with a promise that we can not fail. He also gave a good warning using Jesus’ own words. That God will come back and people will surround him saying they are his people but he will say he never knew them. God will recognize his church, but whether or not he recognizes each member is up to us. I pray he will recognize me.

Another thing that happened was this week did my first service project in awhile. At this place called crossroads its a place that takes donations and sends them to Africa! I got to work with bunch of Somalians! Very cool!

We had a district find and before they had this stage set up in the town center, this one kid was doing all these tricks with a Chinese yo yo. Well later in the day we saw him again! He preformed for us and he has a whole bunch a sick magic tricks, He also has really bad turrets so its awesome to see him develop talents that don’t conflict. Best part is got his number and plan on meeting with him again. I can see it now I’m a Magician, I have turrets, I’m A Mormon.

One of our investigators is in a wheel chair due to an injury, yesterday he told us how, let me share. He said he was seeing a doctor for some depression but he gave him bad drugs that messed with him and pushed him to suicide. He ended up jumping off of 19 story building, the next thing he knows he is hanging across the power cables for a light rail train, so he pushes himself off and falls and hits his head on the rail. So he has this huge bump on his head, and is stuck in the wheel chair, but somehow this man is alive and only ended up damaging his back breaking his leg and he didn’t get brain damage. A pretty crazy miracle , that was in 1997.

Well I got Elder Holland tomorrow that I will tell you about the middle of next week. I got temple coming up.

Love you all
Elder Cordon

Here is a picture from our apartment window, And me with Elder Chan rocking the little and big ties! 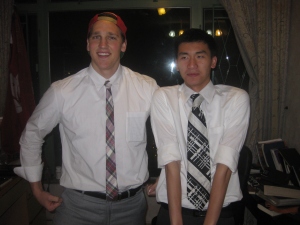 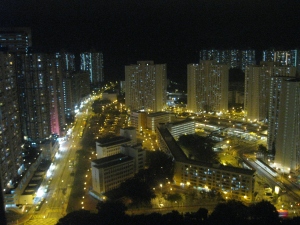 View from our apartment window!